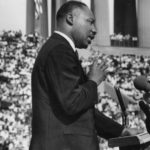 Photo courtesy of Martin Luther King, Jr. Center for Nonviolence Social Change By Danny R. Johnson The Reverend Dr. Martin Luther King Jr. marched mile after mile to pressure America to live up to its too often broken promises of freedom and equality — but he refused ever to take a victory lap. When King spoke on May 10, 1967, — in what proved to be the last year of his … END_OF_DOCUMENT_TOKEN_TO_BE_REPLACED